Your business is a reflection of you. In every way, shape and form—from top to bottom—your business reflects your courage and fears. It reflects what you care about: your ideals, values, beliefs, experiences, knowledge and decision-making. This powerful EMyth Principle appears in the beginning pages of The EMyth Revisited.

These eight behaviors aren’t the obvious ones—like procrastination or trouble delegating—that you already know are unproductive. They’re subtler than that, which means they’re often hard to spot. But to develop as a leader, you need to understand how your negative behaviors are directly related to your strengths. For example, if you tend to take too much responsibility for others and avoid conflict, you probably care deeply about people. That’s a good thing but it can result in unproductive behavior. Once you see the other side of an unproductive behavior and recognize it as the root cause of key business frustrations, you can choose to change how you lead. This is the essence of leadership development.

So whatever frustration you’re experiencing in your business, chances are you’re practicing one (or more) of these behaviors. Here are examples of the eight unproductive leadership behaviors as exemplified by eight different business owners. 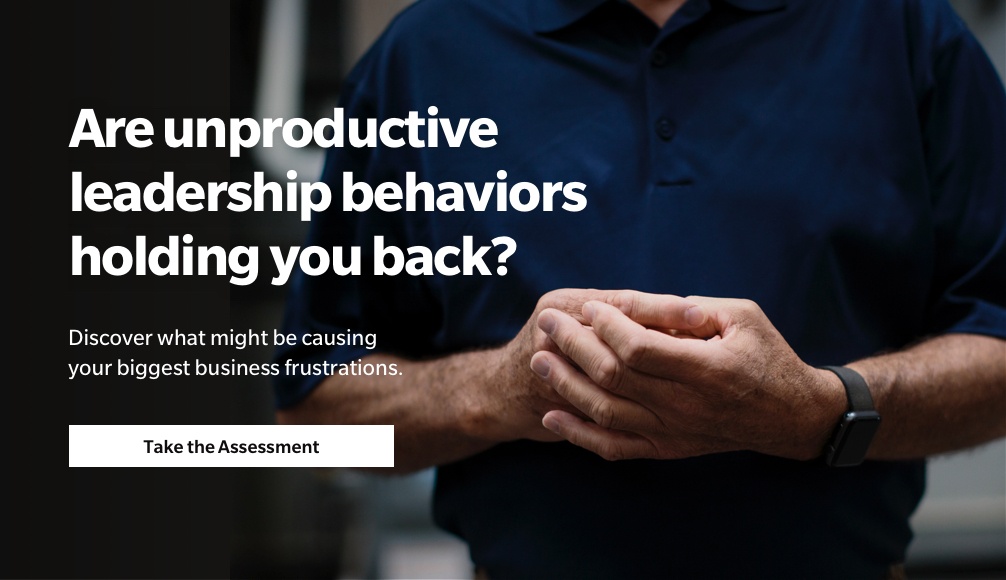 Kirk started his own construction company right out of high school. On the surface, his business has always seemed functional, but internally he constantly experiences failures and has trouble pinpointing the root cause. In general, Kirk is an enthusiastic leader: He has a constant flow of new ideas and initiatives, but he’s always had trouble following through or achieving success with any of them.

What Kirk doesn’t see is that his business challenges come from his own lack of clarity, direction and execution, which radiates out to his team. Instead of taking responsibility for leading his business, Kirk shares responsibility with his managers, who’ve consequently become “the glue that holds everything together.” Being under-responsible in his leadership role has created a system where no one on his team is fully clear on their own roles and responsibilities. So while it looks and feels like they’re being responsible and helping each other, they aren’t achieving results, meeting deadlines or able to be held accountable because none of the responsibilities have singular ownership.

Myopic behavior shows up as a lack of entrepreneurial spirit and personal engagement with your business. Janet, who runs her own pet grooming shop, relates to her business in this way. Over the years, she’s worked hard to build her company and a regular base of clientele, but no matter how good business is going, she always feels acutely like she’s failing. This makes her feel uninspired, depressed and anxious about the future of her business, which makes it impossible for her to plan for it.

Like many business owners who experience myopia, Janet’s lack of vision has become a defense to protect against failure. Without expectations for her business, her disappointment is easier to bear. So instead of feeling like a failure, she operates in a constant state of dissatisfaction. She’s gotten comfortable serving fully as a Technician with a business that operates at break-even, and thinks about expansion and growth as a “someday maybe it will happen to me” scenario rather than “how can I plan for growth?”.

A fear-based business owner is always worried about the worst-case scenario around the corner and has serious difficulty with risk. Take Steve, who’s operated his blind and window furnishings company for over 30 years. Over time, Steve has tried certain strategies to grow his business and failed—and each time, the experience was so painful that he had more and more trouble getting back on the horse.

Like many business owners, Steve is a hard-working Technician,who uses this strength to hide from the challenge and discomfort of developing as a leader. On the outside, his own brilliance for doing the work of the business justifies staying in the day-to-day. But on the inside, Steve is operating from fear. He doesn’t want to deal with anxiety and discomfort for the sake of growing his company. He doesn’t want to take unknown risks to make things better for his business and his team. So Steve shies away from formal planning and leading: He procrastinates and is paralyzed from making necessary changes like firing poor performing employees, taking calculated risks or incorporating new systems—and this fear has created significant stagnation in his business.

Ever since he was young, George has always been incredibly creative and spontaneous, so it makes sense that he translated his energy into starting his own photography studio. At first business was great. He drilled up many clients for small projects and events, but as his business grew, he needed to shift from the quick movement of being on shoots to managing a whole book of business with a staff.

Making that shift has been a challenge. George is constantly frustrated that his team isn’t as inspired as he is, and his tendency toward distraction makes it impossible to handle the long periods of stillness and focus necessary to plan and invest in the infrastructure for growth. He treats the business the same way you might spoil a child—impulsively giving it what it seems to need in the moment, without quantifying performance and planning. Unable to access his inner Manager, George can’t stick with any long-term strategy and instead just takes on more and more clients, growing his business to compensate for problems rather than addressing them. This creates the impression of unreliability for his team.

A micromanager is dominated by their fear of losing control. Since starting her own hair salon, Andrea has allowed micromanagement to be her way of leading. In an effort to control everything and to keep her employees doing things her way, she’s created systems around sanitation and work spaces that are more a means of control than a way to support best practices. She allocates tasks without any direction or authority, and when her employees have trouble succeeding, Andrea responds with frustration by taking away responsibilities rather than providing constructive criticism.

In general, Andrea feels that no one can do the work like she can, so she spends very little time training. As a result, her employees have learned that it isn’t worth it to evolve because ultimately they'll never meet Andrea’s standards, and she’ll probably end up doing it herself in the end anyway. Her micromanaging behavior results in low-performing and under-responsible employees, management conflict, and a lack of passion and personal engagement.

The over-responsible business owner is incredibly common. Tyler is a prime example. He’s a young, do-it-all general contractor with a small team of employees. He always operates in complete overwhelm, and takes a lot of pride in being the only one with all the answers and coming to the rescue whenever any client needs him—in unreasonable ways. Once, he drove 40 miles just to look at a blueprint with a client who didn’t want to discuss it over the phone! His over-responsibility comes from deep caring, but it shows up as stress and extreme generosity at his own personal expense—and it ultimately takes away from the growth and responsibility of his team. As is also common for this type of leader, Tyler has incredible money issues because of his tendency to sacrifice his own needs: He tends instead to ignore money matters, undercharge, leak cash needlessly and delay invoicing.

Nick has always gauged personal value by quantifiable success in school and work. So when he started his own commercial landscaping business, Nick was driven by its immediate growth. With each success, he became more motivated to grow until he found himself working ‘round the clock. His tendency toward overachievement shows up as a need for accomplishment at any cost. He grew his company and team quickly. But without any real business vision aside from immediate growth, he started cutting corners and laying unrealistic expectations on his team that matched his own drive—and he wouldn’t stand for any criticism or failure.

After years of functioning this way, the work has begun to feel hollow, superficial and uninspiring. And the business objectives and strategies he has created lack any sense of value. He can’t inspire his employees anymore because his motives aren’t based on meaningful values that they can engage with. For Nick, the pursuit of fulfillment has replaced actual fulfillment in his life.

As with overachievers, disconnected business owners are very common for the simple reason that many of them never started a business to be a leader. They went into work for themselves, and managing people and building a real business came as a consequence of growth. This was the case for Anna, who started her own yoga business as a solopreneur who just wanted to offer virtual classes or contract at health centers. But she got so popular that she decided to open her own studio and bring in other teachers to help with classes.

Things quickly got difficult for Anna. She didn’t want to lead, she just wanted to offer a space for others to come in and teach—but this created a power vacuum. Though capable and independent, the other teachers are technically her employees, and want some sense of direction and structure in the studio aside from just showing up. While Anna gets along well with everyone, she offers nothing in the way of guidance, commitments or a sense of unity. And she doesn’t want to acknowledge issues, comfortable to “keep her head in the sand”. As a result, Anna can’t keep teachers employed, and those who stay take advantage of the disorganization by showing up late, not signing in guests or taking payments, and not cleaning after sessions. Her business has become a nightmare.

Truly changing your business means assessing yourself to discover your predominant unproductive leadership behaviors and improve your awareness of how they show up in your business. In every example above, the behavior or way of thinking that became the root cause of the owner’s frustration was automatic and unconscious, happening by default not by decision.

Once you identify the behavior or behaviors that apply to you, work to keep them in your awareness. Every decision you make, meeting you have, and system you create can either perpetuate dysfunction or work towards a healthier version of your business. It all starts with your own awareness and willingness to consciously change your behavior for the better. Tricia is EMyth's Director of Coaching. She joined the EMyth team in 2002.